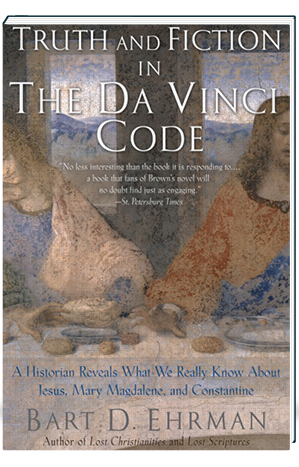 Truth and Fiction in The Da Vinci Code:
A Historian Reveals What We Really Know
about Jesus, Mary Magdalene, and Constantine

Ehrman, chair of religious studies at UNC-Chapel Hill, has written widely on the subject of early Christian documents and the formation of the biblical canon. While acknowledging that Dan Brown’s The Da Vinci Code is an exciting mystery novel, Ehrman questions some of its historical claims. Focusing on 10 areas of concern, including the role Constantine played in the formation of the both the church and the Bible and the evidence for Jesus’ personal involvement with Mary Magdalene, Ehrman reviews the historical record and demonstrates that Brown’s history behind the mystery is seriously flawed. Ehrman is not concerned with theology; he has no interest beyond that of the professional historian who wants to arm the everyday reader with sound research and helpful historical perspective. His is a documentary approach, avoiding speculation and theory. This tone distinguishes the book from many other responses to Brown’s novel that uphold a particular theological agenda. Ultimately, Ehrman believes that readers should not try to learn history from speculative fiction. This is a very readable treatment of some difficult themes, such as the reasons for the exclusion of some early gospels from the canon and the enormous influence of recent archeological discoveries. Readers at every level will appreciate this book. Copyright © Reed Business Information, a division of Reed Elsevier Inc. All rights reserved.

There are have been several books debunking Dan Brown’s enormously popular Da Vinci Code; often the rebuttals have been coated with hostility. Ehrman, a biblical historian, does it better. Using the novel as a jumping-off point, he offers a highly readable introduction to the historical Jesus as well as a brief primer on biblical exegesis. Not an easy task to provide such complex material for a pop-fiction audience, but Ehrman succeeds brilliantly. He immediately gives Brown’s book its due; it’s a page-turner, and there is no need to refute that. But the book is filled with many historical inaccuracies, everything from claiming the Dead Sea Scrolls were Christian documents to the idea that all the Jewish men of the era were married. (The assumed writers of the scrolls were celibate.) Ehrman uses each inaccuracy as an opportunity to explain how biblical scholarship works. The topics he touches on include how historians assess documentation, the Gnostic gospels in Christian thought, the role of Constantine in the formation of a Christian empire, and the role of women in the early church. Everyone loves conspiracies and secrets, which makes it a bit melancholy to watch Ehrman remove the veil from the Jesus story. Even the most devoted Da Vinci Code fan, however, will be forced to agree that Ehrman succeeds at separating historical fact from literary fiction. Ilene Cooper. Copyright © American Library Association. All rights reserved