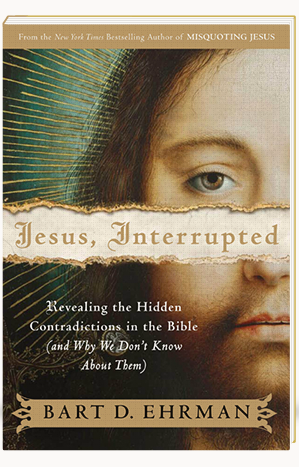 Jesus, Interrupted: Revealing the Hidden
Contradictions in the Bible
(And Why We Don’t Know About Them)

These are not idiosyncratic perspectives of just one modern scholar. As Ehrman skillfully demonstrates, they have been the standard and widespread views of critical scholars across a full spectrum of denominations and traditions. Why is it most people have never heard such things? This is the book that pastors, educators, and anyone interested in the Bible have been waiting for—a clear and compelling account of the central challenges we face when attempting to reconstruct the life and message of Jesus.

“Scholars have made significant progress in understanding the Bible over the past two hundred years and the results of their study are regularly and routinely taught, both the graduate students in universities and to prospective pastors attending seminaries in preparation for the ministry. Yet such views of the Bible are virtually unknown among the population at large. As a result, not only are most Americans (increasingly) ignorant of the contents of the Bible, but they are also almost completely in the dark about what scholars have been saying about the Bible for the past two centuries. This book is meant to help redress that problem.”
— from Jesus,Interrupted