Jesus As An Apocalyptic Prophet 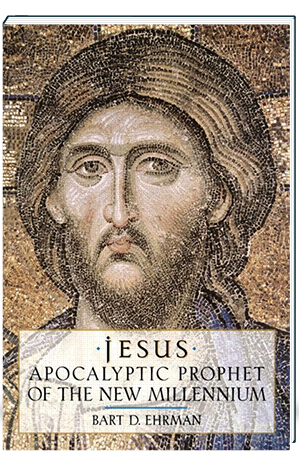 In this highly accessible discussion, Bart Ehrman examines the most recent textual and archaeological sources for the life of Jesus, along with the history of first-century Palestine, drawing a fascinating portrait of the man and his teachings.

Ehrman shows us what historians have long known about the Gospels and the man who stands behind them. Through a careful evaluation of the New Testament (and other surviving sources, including the more recently discovered Gospels of Thomas and Peter), Ehrman proposes that Jesus can be best understood as an apocalyptic prophet–a man convinced that the world would end dramatically within the lifetime of his apostles and that a new kingdom would be created on earth. According to Ehrman, Jesus’ belief in a coming apocalypse and his expectation of an utter reversal in the world’s social organization not only underscores the radicalism of his teachings but also sheds light on both the appeal of his message to society’s outcasts and the threat he posed to Jerusalem’s established leadership.

“An elegantly written, much-needed book…. Ehrman’s should be the first book for any lay reader interested in the historical Jesus.” –Kirkus Reviews

“While Ehrman’s provocative thesis will stir up controversy among scholars, his warm, inviting prose style and his easy-to-read historical and critical overviews make this the single best introduction to the study of the historical Jesus.” –Publishers Weekly (starred review)

“Bart Ehrman’s look at the much-debated mysteries of the historical Jesus is thoughtful and responsible yet also fresh and–of all things–flavored with an appropriate wit. Anyone familiar with the subject will know how rare such a combination is. I commend it strongly to any reader who’s willing to follow a well-stocked mind wherever it leads.” –Reynolds Price, author of Three Gospels, Letter to a Man in the Fire: Does God Exist and Does He Care?

“In Jesus, Apocalyptic Prophet of the New Millennium , Bart Ehrman offers an exciting and accessible study of the historical Jesus. He canvasses a wide range of ancient texts and modern interpretations as he orients his reader both in the distant world of late Second Temple Judaism and the current swirl of scholarly opinion. With verve, warm humor and exemplary clarity, Ehrman’s Jesus provides the nonspecialist reader with an excellent introduction to this often elusive figure, the Jesus of history.” –Paula Fredriksen, Boston University

“Bart Ehrman is that rare creature who is not only a good scholar but also a fine teacher. In Jesus, Apocalyptic Prophet of the New Millennium , he addresses a general audience who may know next to nothing about serious historical work on Jesus of Nazareth. With his usual clear and humorous style, he explains technical problems in a way that almost any educated reader could understand…. Ehrman has given us a healthy and needed correction to the portrait of Jesus common in many American academic circles today, influenced as they are by the Jesus Seminar. This book will be of great use in an undergraduate course seeking to introduce students either to the historical Jesus in particular or to New Testament studies in general.”–John P. Meier, University of Notre Dame, author of A Marginal Jew: Rethinking the Historical Jesus: Mentor, Message, and Miracle