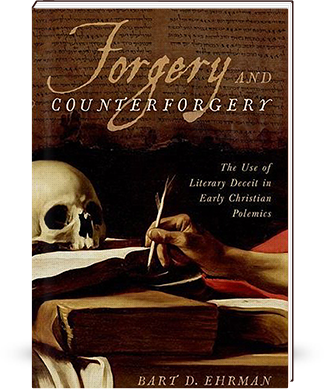 Forgery and Counterforgery:
The Use of Literary Deceit in Early Christian Polemics

“The quality is very high; it is very thorough and well-researched. … Ehrman has produced a learned and engaging survey of early Christian controversial literature from the vantage point of authorial identity and rhetorical deceit, asking why Christians lied about themselves when writing polemical works and why scholars are so resistant to acknowledging their forgeries. … There is no other major scholarly study in English that tackles this subject with such thoroughness, and its usefulness to students of early Christian literature will be undeniable. … There is no comparable work in English on forgery. … I also think general readers will pick it up and find it fascinating. … The prose is solid, the arguments are clear and effective, and the significance of this study is undeniable.” –Andrew Jacobs, Associate Professor and Chair of Religious Studies at Scripps College

“The book is excellent. It will make an enormous impact on the field of New Testament studies and also studies of pseudepigraphy in the ancient world. … The book will make a huge contribution to the field. There are comparable books in German, but this one goes beyond them all. And it will be the only thing of its kind in English.” –Dale B. Martin, Professor of Religious Studies at Yale University

“The book tackles an important subject–the nature of ancient Christian pseudepigraphy–and makes a significant contribution to it…. The author’s contribution lies in updating Speyer’s thesis that pseudepigraphy was usually, on the contrary, an attempt to deceive, and in establishing this thesis in a comprehensive English-language monograph. The greatest strength of the book is its comprehensiveness.” –Joel Marcus, Professor of New Testament and Christian Origins at Duke Divinity School

“Examining over fifty examples of early Christian forgery and their polemical contexts, Ehrman uncovers the varied motives that prompted ancient Christian authors intentionally to deceive their readers. Whether these authors forged their works to support or critique the Apostle Paul, to oppose or celebrate “the flesh”, to promote their own views of doctrine and church leadership, or to defend Christianity against hostile critics, the sheer magnitude of early Christian forgery startles the modern reader. Ehrman demolishes the claim that forgery was an acceptable literary practice in Greco-Roman antiquity, as well as scholars’ attempts to “explain away” its prevalence in early Christianity. Ehrman’s remarkable and comprehensive account of a misunderstood practice is unparalleled in English-language scholarship.” –Elizabeth A. Clark, John Carlisle Kilgo Professor of Religion and Professor of History, Duke University

“With Forgery and Counter-forgery, Bart Ehrman has decisively undermined the view that the early Christian pseudepigraphic writings are something other than forgeries. These works, however well-intentioned, were, quite simply, “bastards” and were viewed as such whenever their false authorial claims were discovered. Based in flawed or faulty scholarship, modern attempts to excuse the New Testament forgeries are therefore misplaced, revealing the longings of contemporary readers for secure canonical authorities capable of defending their own points of view. This deeply engaging, carefully documented and thought-provoking exposé of ancient forgery is required reading for anyone interested in understanding how, and why, so many Christian writers sought to pass off their works as the products of named authorities when they so obviously were not. Thoroughly convincing.” –Jennifer Knust, Boston University