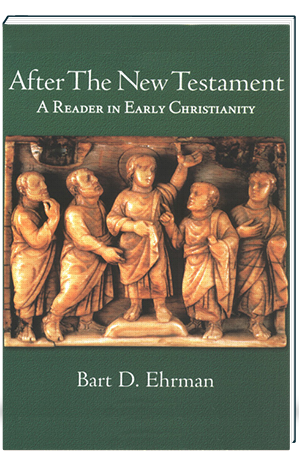 After the New Testament: A Reader in Early Christianity

The remarkable diversity of Christianity during the formative years before the Council of Nicea has become a plain, even natural, “fact” for most ancient historians. Until now, however, there has been no sourcebook of primary texts that reveals the many varieties of Christian beliefs, practices, ethics, experiences, confrontations, and self-understandings. To help readers recognize and experience the rich diversity of the early Christian movement, After the New Testament provides a wide range of texts from the second and third centuries, both “orthodox” and “heterodox,” including such works as the Apostolic Fathers, the writings of Nag Hammadi, early pseudepigrapha, martyrologies, anti-Jewish tractates, heresiologies, canon lists, church orders, liturgical texts, and theological treatises. Rather than providing only fragments of texts, this collection prints large excerpts–entire documents wherever possible–organized under social and historical rubrics.

This unique reader’s concise and informative introductions and clear and up-to-date English translations make it ideal for courses on the New Testament, Christian Origins, Early Church History, or Late Antiquity. It will also be of interest to anyone–student, scholar, and general reader alike–interested in the entire range of early Christian literature from the period after the New Testament up to the writings of the so-called father of church history, Eusebius.

“Each chapter begins with a sketch of the important historical aspects of the topic, and each individual text is introduced with brief comments concerning its historical context and significance. The topical introduction of each chapter is not a brief and passing mention, but rather an in-depth essay to the stated topic, with a brief bibliography before the primary text on good current titles for further reading. This reader is a welcome and needed addition to the increasing titles available on early Christianity, especially since it is not an anthology of secondary scholarly opinion on the history of early Christianity, but provides the opportunity for students to become immersed in the primary sources themselves.”–John Voelker, Marquette University, in the Journal of Early Christian Studies

“An outstanding collection of relevant primary sources for courses on the history of early Christianity. Students found the texts exciting, readable (because of the modern translation), and informative. They also appreciated the helpful introductions to each section.”–William Tabbernee, Phillips Theological Seminary

“Ehrman’s shrewd chapter topics, along with his brief (but pithy) introductions enable good use of these 2nd and 3rd century texts which together well represent the breadth and variety of Christian beginnings. We now have a fresh and student-friendly set of resources for examination of early Christian literature ‘after the New Testament.'”–Bob Gregg, Stanford University